Bertus’ father killed lions in order to protect their cattle and goats. Imagine living as close to lions as Bertus and his family do: They depend on their livestock for food and cash to buy essentials like maize meal, soap or nowadays a mobile phone. Their livestock is often their only source of income. Still, Bertus, and many younger people, do not want to kill lions any more – and the main reason for this is tourism! 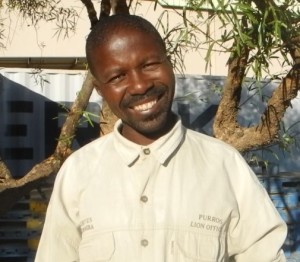 Bertus is lion officer in the Purros conservancy, his salary is funded by TOSCO. His task is to help ensure that lions stay away from livestock, and thus from serious trouble. Bertus says that before he met Dr. Stander from the Desert Lion Conservation Project he didn’t know what to do about the lion problem. According to Bertus, a farmer gets a compensation of N$ 1.500 for a cow killed by lions. But a cow is worth more and it is often a problem to prove that lions killed the cow. How can it thus be avoided that lions kill livestock? With Dr. Stander, Bertus says, new solutions arrived. Leaders of the lion prides were fitted with satellite collars, which provide information about the lions’ movements. Dr. Stander makes this information available to the people. They now know where the lions are and thus can move livestock away from the danger zone in time.

This is also Bertus’ job. Bertus monitors the position of the lions with his mobile phone, alerts the community and if necessary takes action. Among the lions Bertus cares for, are famous ones like XPL-68, known as  “The Terrace Male” that ventured into Angola, XPL 73 “Rosh”, and XPL 70, the female that got collared with funds from TOSCO Trust early 2013.

Either, Bertus arranges for cattle and goats to be moved away or, he and his two colleagues move away the lions! Usually, lions don’t come close to the villages, according to Bertus’ experience, but  when they do, there is danger. So, the lion officers chase them away by using strong flashlights and noise. If all does not help, Dr. Stander is called. At one occasion, they immobilized a whole lion pride and transported them far away from the villages. If they hadn’t done so, for sure there had been dead cattle and thus even dead lions.

In addition to that, the lion officers patrol the area for lion tracks and any other suspicious signs. They also cooperate with the Rhino Knights from Save the Rhino Trust and other rangers, to prevent poaching. They do not have a car for all this, they do it on foot or using donkeys! Bertus says transport is an issue and more kraals (safe enclosures for livestock) would be needed. Also, he is worried that the current drought might increase conflicts with lions. There is now less grass around the homesteads, so livestock is led to graze far away. This makes them more vulnerable to lions, and other carnivores. Furthermore, the lions might be more inclined to snatch an easy beef steak instead of hunting the far dispersed oryx in their territory.

As tourists come to the Purros area to see the desert lions, they are valuable in economic terms. Therefore, lions are not only seen as a threat  any more. Tourism has created jobs, for example at lodges, or the lion officer programme. Thus, many local people do not only depend on their livestock any more. However, there is still  a lot to do: Conservationists and tourism operators were hit hard with this fact, when a whole pride of lions got poisoned close to Purros in 2011.

This was when TOSCO Trust was founded, with the mission to provide funds to help local people benefit from tourism and help organisations like the Desert Lion Project to mitigate wildlife conflicts. Local people must benefit from the lions broadly – i. e. not only those who have found employment in tourism but ideally everybody. Otherwise, as numbers of lions and humans in the region grow, more conflicts might lead to more lions getting killed. Thus, the local people need help in living with the lions.

In order to be more efficient, Bertus and his colleagues need binoculars, tents, bedrolls, cameras and water bottles. If you want to support them or TOSCO please contact us at info@tosco.org.