Only one dead cow in 2013! Since the start of the lion officer programme end of 2012 only one farmer lost one cow to lions in the Puros conservancy.

All over Africa, lions are killed by local people whose livelihood is threatened by lions. Whereas we all have an interest in the lions and the wild places they live in, the local people bear the costs, e. g. when lions eat their cattle and goats or elephants raid their crops. And they retaliate by killing lions. 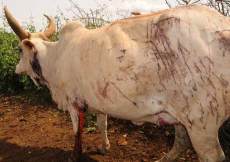 A growing human population just adds to the problem. Namibia’s desert adapted lions in the Kunene region form the only free-roaming (outside of national parks) lion population in the world that is still growing! There are scientist who fear the wild lions might be extinct in 15-20 years.. 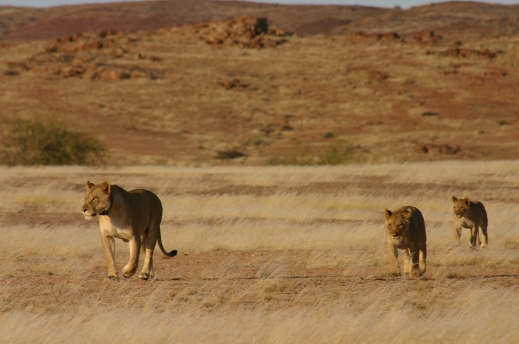 Namibia has achieved a lot with its internationally renowned conservancy programme. But as the numbers of wild animals as well as of humans increase, so do conflicts. Sometimes the people are just not used to living with the wild animals anymore after their numbers had been greatly reduced by the end of the 1980ies. And, not all local people benefit sufficiently from tourism to off-set the losses.  Therefore, the aim of the lion officer programme is to avoid conflicts of lions with humans. And not only that. We also intend to create employment and thus add sustainable value to living lions, in contrast to trophy hunting or shooting problem lions. And, as they live so close to the lions, the local people can feel safer when the lion officers watch fearsome predators’ movements. Thus, the lions are less at risk of being killed. 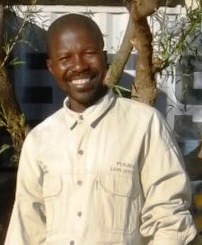 The lion officer programme has been tested in the Puros and Torra conservancies since end of 2012 as a pilot project in cooperation with IRDNC, an organisation that has been working closely with the conservancies from the very beginning in the 1990ies. There have been three lion officers up to now, Bertus, Colin and Kootie, whose salaries have been covered by TOSCO, Kunene Conservancy Safaris and Schoeman Fly-in Safaris. TOSCO (Tourism Supporting Conservation) is proud of supporting this programme, which we are able to do thanks to our sponsors. TOSCO has also sponsored the collaring of one lioness so far, XPL-70/ Okongwe Lioness. Collaring of lions is an essential part of the lion officer programme.

With only one cow having been killed in the Puros area in 2013, the test is a success. We would therefore like to continue sponsoring the salaries of lion officers and help making them more efficient by equipping them properly, e. g. with bedrolls, so that they can stay out overnight, a GPS so that they can better track the lions, water bottles, uniforms to make the recognizable, warm clothing, binoculars, etc. If funds allow TOSCO, together with IRDNC and the Desert Lion Conservation Project would also like to extend the program to other conservancies in the future.

2013 Report back on Lion Rangers

2013 was very much a pioneering year for the Lion Ranger (formerly known as Lion Guards) and Lion Mitigation Project in the Kunene Region.  One can confidently state, that thus far, this initiative has been a great success.  Although there have been significant stock losses, particularly in the Torra and Sesfontein Conservancies, and at least 10 stock raiding lions have been killed, the situation could have been substantially worse. Observations by IRDNC , MET and the Lion Rangers showed that there was ample opportunity for farmers and conservancy members to have destroyed the entire resident prides.

However, since the inception of this project, Torra Conservancy has risen to the challenge and must be commended on their attitude, approach and commitment, even under trying times when stock losses persisted.  All in all, Torra farmers lost 121 head of livestock to predation during 2013. Despite this, the Conservancy has followed agreed protocol and upheld resolutions made during meetings held with stakeholders throughout the year. Although the Torra Lion Management Plan is still in draft form and under review by the committee, its recommended procedures and guidelines were observed and respected.

Sesfontein Conservancy faced enormous logistical challenges.  The lack of transport in particular severely limited the effectiveness of the Lion Rangers. The drought too exacerbated the situation by forcing farmers to move their livestock into areas they did not normally use.  This Conservancy lost a total number of 261 head of livestock to predation in 2013.

Anabeb Conservancy has only had two incidents of lions encroaching on farming area and fortunately these did not result in any stock losses. It must be mentioned that Anabeb has a dynamic complement of Community Game Guards and the low rate of livestock losses can most definitely be attributed to their efforts and pro-active involvement.

The Puros Conservancy Lion Rangers also contributed to the low number of livestock losses in their area and to the overall conservation of lions.  These Rangers too had to deal with very trying transport issues, but with their pro-active approach and commitment to the project still managed to warn herders when lions were in the area thus minimising livestock/lion confrontations.  On the few occasions where stock losses due to lions did occur they went out of their way to find means to visit the incident sites.

·         The commitment by quite a number of tourism industry members to supporting this project has been fantastic. Please see the list at the end of this report.

·         Torra Conservancy’s commitment and progress as a whole. A definite highlight was the excellent use of the data from the Desert Lion website as an early warning system of lions’ presence in certain areas. This system directly prevented many livestock losses.

·         Torra Conservancy asked for their Lion Rangers to be trained in the use of the Event Book system. This was done and the Lion Rangers are recording all game sightings. This will contribute to the overall data base for Kunene Region.

·         Sesfontein Conservancy has opened up and started communicating about their lion problems and the number of lions destroyed. The status quo prior to this project was simply to shoot or poison lions and not to tell.

Aims/Goals for the Lion Ranger venture for 2014

·         Securing remuneration for all the Lion Rangers. This is for the whole year and a bonus i.e “13th cheque” should be included. The standard has been set at N$1200 per month.

·         Re-instating and reviving the Lion Ranger system in Sesfontein Conservancy.

·         Sourcing funding for uniforms and equipment for the Lion Rangers.

·         Finding ways of assisting those conservancies with severe transport challenges.

A Snap Shot of Community Based Desert Lion Conservation for 2014

The Lion Ranger system is a vital part of a multi-faceted approach to Desert Lion Conservation in the Kunene Region. It is very important tool to establish and maintain communication and serves as a useful conduit when issues arise and that need attention. Furthermore this system allows the community to take “ownership” of the lions. In addition it adds value directly to the lions.  In an area where job opportunities are extremely limited, the incomes derived directly from lion-related jobs are now contributing towards several families’ livelihood. Further, the Lion Rangers do assist farmers and herders when threats are imminent.

The points below summarise our focus for 2014:

·         Sourcing funds to boost the payments made for livestock losses to lions. The current rate is N$1500 per cow/ox which is woefully below market value. One can surely not expect the farmers’ tolerance of lions to increase on this basis when the market value for a cow/ox is approximately N$4500.00. We are thus looking at creative ways of elevating compensation to a more acceptable and reasonable level.

·         Expanding and maintaining the Lion Ranger network. This includes sourcing uniforms and equipment.

·         Obtaining more satellite collars to assist with early warning of the presence of lions in farming areas.

·         Sourcing material for the construction of predator proof kraals where livestock can be safely kept at night.

·         Starting and driving the process of developing Lion Management Plans for these conservancies.

Many thanks to the following for supporting the Lion Rangers:

Ø  TOSCO, Supporting a Lion Ranger at Puros and also for materials for building a kraal at Slangpos (Torra)

Ø  Widerness Safaris, for supporting a Ranger in Torra Conservancy and for other considerable logistical assistance

Ø  Conservancy Safaris Namibia for supporting a Ranger in Sesfontein

Ø  Khowarib Lodge and Safaris for supporting a Ranger in Sesfontein.

Ø  Conservancy Safaris Namibia for supporting a Ranger in Puros