WINDHOEK, Namibia (14 Sept. 2018) – The keeping of cheetahs as pets or captive animals at farms and guest/hunting lodges in Namibia appears to have increased in the past couple of years as reported by several of the Large Carnivore Management Association of Namibia (LCMAN) members. Cheetahs should never be taken from the wild, and the practise is illegal according the Ministry of Environment and Tourism (MET). Most captive cheetahs will inevitably be relinquished to authorities, voluntarily or involuntarily (if proper permits are not in place), and will then have to be placed with a registered organisation authorised to care for these animals. If the condition of the animal is not good, it will be destroyed.

There are a handful of organisations registered in Namibia that act as custodians for the MET and hold non-releasable cheetahs that have been confiscated. MET has strict criteria for registering large carnivore holding facilities, including animals having annual veterinary check-ups and proper enclosure structures and sizes. Additionally, large carnivores are not allowed to have free contact with people for tourism activities.

“Large carnivores, including cheetahs, do not make good pets. Cheetahs are a delicate species that can suffer from many health-related issues and require special food and care, as well as physical and mental stimulation. If they do not get this proper care, they most often get very sick”, said Dr Laurie Marker, Chair of the LCMAN, and Founder and Executive Director of Cheetah Conservation Fund (CCF).

Not only is it against the law to keep a pet cheetah in Namibia, it is also detrimental to the animals. Cheetahs require very specific holding facilities and proper food (with vitamins and minerals found in a wild diet) to keep them in good health. 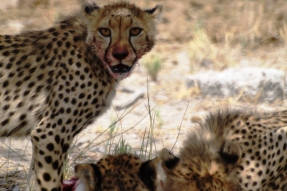 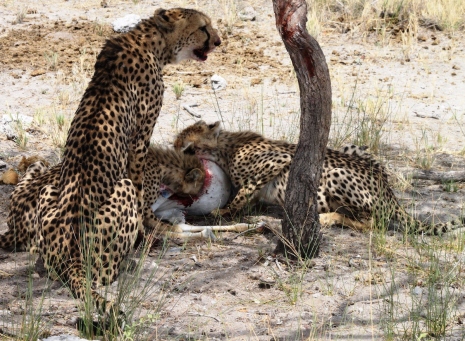 The most prominent health issue seen in adult cheetahs and confiscated or rescued cubs held in registered facilities is malnutrition, which is accompanied by a variety of ailments such as bone deformities, stunted growth, irritable bowels, very low muscle mass, overweight, underweight, broken teeth, fractures, parasites and viruses. Some also develop abnormal behavioural issues due to being teased. At times, animal abuse occurs, with cheetahs being locked up in a garage or small cages for months with no access to sunlight. Recently, a confiscated cheetah cub had to undergo surgery to remove a toy rubber ball from its stomach.

Most cheetahs held at registered Namibian facilities came in as orphaned or injured animals and are unable to hunt on their own. Often, cubs are received from farmers who have trapped or killed an adult due to human-wildlife conflict (HWC), only to discover later a nest of cubs. Other times, people take cubs to keep them as pets, or because they feel they are acting as ‘Good Samaritans’ by rescuing cubs they find in the bush unattended. Regardless of the reason, people who take the cheetah cubs often change their minds and bring these cubs to one of the registered facilities; however, in many cases MET will take action.

“The Ministry of Environment and Tourism condemns this unlawful practice and calls upon all Namibians to refrain from undertaking such activities. Our conservation principles, laws and policies restrict keeping any wildlife species under captivity or as pets. In addition to the financial and health challenges that may arise from keeping wildlife species in captivity, the practice impacts on the ecosystem as well as on the economic and social contribution from the sector. Furthermore, this practice is punishable by law and those found will be prosecuted or fined”, said Romeo Muyunda, MET’s Chief Public Relations Officer.

“Our focus, as LCMAN members, is conserving cheetahs and other carnivores in the wild and not keeping them in captivity; however, several LCMAN members maintain registered sanctuaries for non-releasable cheetahs where they feed, house and provide veterinary care for the animals. The annual cost for each captive cheetah is considerable. In the wild, cheetah cubs stay with their mothers for 18 to 22 months to learn survival skills. Often, cubs are brought in that are one-year-old or younger and have not learned the skills they need to live in the wild. Some of them might be able to be rewilded as they get older. However, most younger cubs will never be able to go back into the wild, but even with release candidates there are huge struggles to find the appropriate land to release them, considering the safety of the cheetah and the people living there.

“Cheetahs are among Namibia’s most precious resources. Namibia is known internationally for having the world’s largest remaining cheetah population, approximately 1,500 adults and adolescents out of a worldwide population of less than 7,500. People travel from all nations to visit Namibia to see our wildlife, and tourism is one of the highest contributors to our economy”, said Dr Marker. “Please leave cheetahs where they belong, in the wild. Help us, help you to make a plan to live together”, said Dr Marker.

What You Should Do If You Encounter Wild Cheetahs